The rapid development of urbanization and modernization favored a booming population of obesity and type 2 diabetes mellitus (T2DM) worldwide. Massive evidence indicates that both obesity and T2DM disrupts the energy intake and expenditure , and the brain, however, is likely to be a victim as well eventually, although the physiological compensation can preserve adequate substrate supply to the brain. Accounting for only 2% of the body weight in humans, the brain is the leading glucose consumer that utilizes up to 20% of the glucose-derived energy to maintain its normal function and entirely relies on the unceasing glucose supply transferred across the phospholipid membranes of microvascular endothelial cells that form the blood-brain barrier (BBB). Glucose transporters (GLUTs), as their names imply, facilitate the transport of glucose through the cellular plasma membrane (PM), among which the GLUT-1 is responsible for maintaining the regular cerebral blood flow, BBB integrity, neuronal function, and structure . While GLUT-4, the only transporter in charge of facilitating glucose into the cells in response to insulin, is deemed a vital regulator of whole body glucose homeostasis, including the brain .

All patients underwent 18F-FDG PET-CT imaging after fasting for more than 4 h. Before 18F-FDG injection, the patients’ fasting blood glucose (FBG) levels were lower than 8.3 mmol/L. After the intravenous administration of 18F-FDG at a dose of 3.7 MBq/kg, patients were instructed to rest with their eyes closed in a quiet room with low light and minimal environmental noise for 60 min before imaging. The imaging instrument model was a GE Discovery STE16 (GE Healthcare), and the cyclotron’s model was a GE Minitrace (GE Healthcare). The image acquisition of the brain ranged from parietal to neck, and 64 rows helical CTs were used through scanning under the following conditions: tube voltage 160 kV, tube current 260 mA, 2.5-mm thick; PET collection for every bedtime was 5 min. Scan data were rebuilt into an image fusion using the viewpoint method, forming coronal, sagittal, transverse CT, PET, and PET-CT image fusion.
设备： 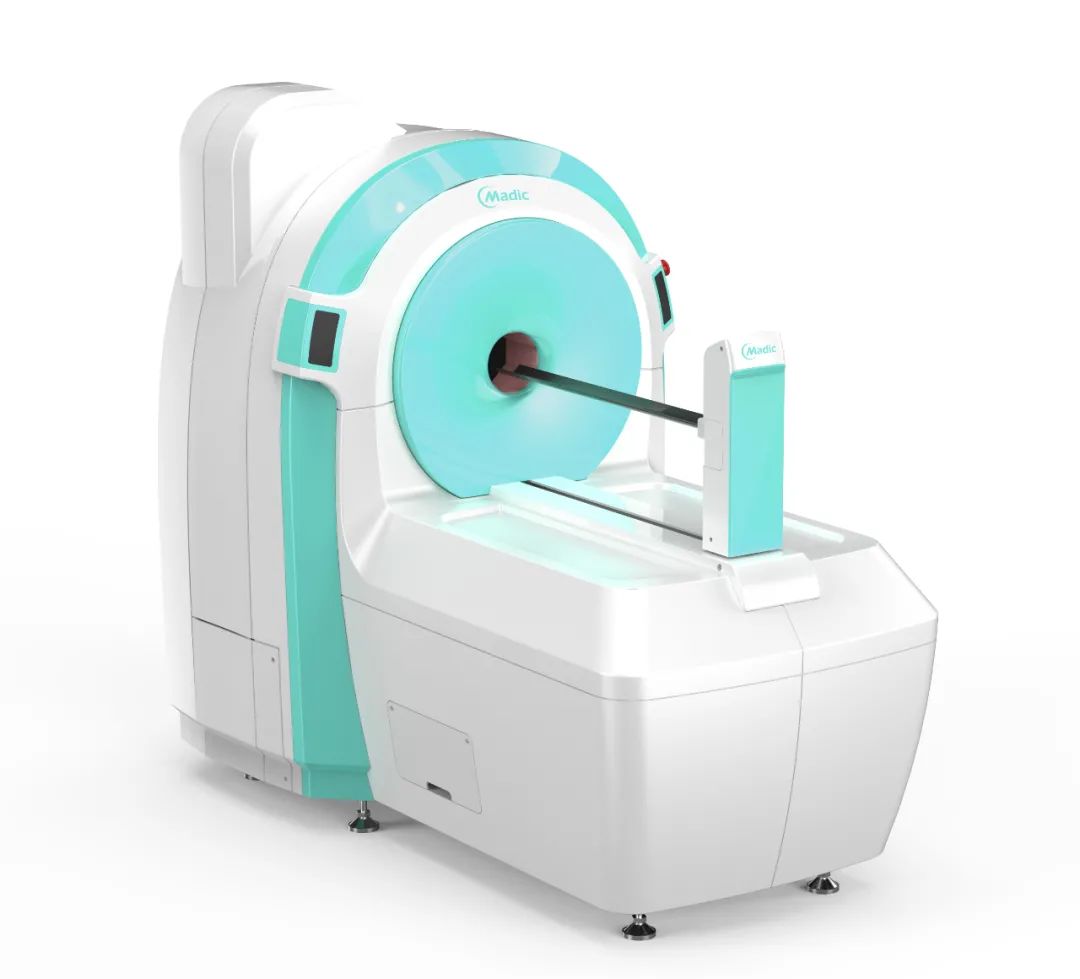 分析：PET images of the human brain were analyzed by quantifying the mean and maximum standardized uptake values (SUVs) using Pmod Software 4.2 (PMOD Technologies LLC, Switzerland). To evaluate the glucose uptake of the whole brain and the hippocampus, the hemicerebrums at the basal ganglia sections and hippocampal regions were manually and symmetrically selected as the volume of interest (VOI), respectively, on transverse images, then the automatically calculated SUVMean and SUVMax of the same hemicerebrums were separately compared among groups.

The patients who underwent RYGB included five males and four females, and the mean age was 47 ± 8, ranging from 34 to 62 yr old (Fig. 1A). Six months after surgery, significant differences were seen in body weight, body mass index (BMI), FBG, insulin resistance, postprandial blood glucose (PPBG), and HbA1c compared with their preoperative status (Fig. 1, B–G), which all indicated a profound amelioration in systemic metabolism and glucose homeostasis. Thus, to further evaluate the improvement in brain glucose uptake, patients’ brains were scanned with PET-CT, where the images and the SUVMean and SUVMax showed that the improvement in the whole brain (Fig. 1, H and I) or the hippocampal regions (Fig. 1, J and K) were tremendous. Collectively, these data suggest that beyond its primary role in reducing body weight, RYGB improved the systemic glycemic control and the brain glucose uptake of the patients. 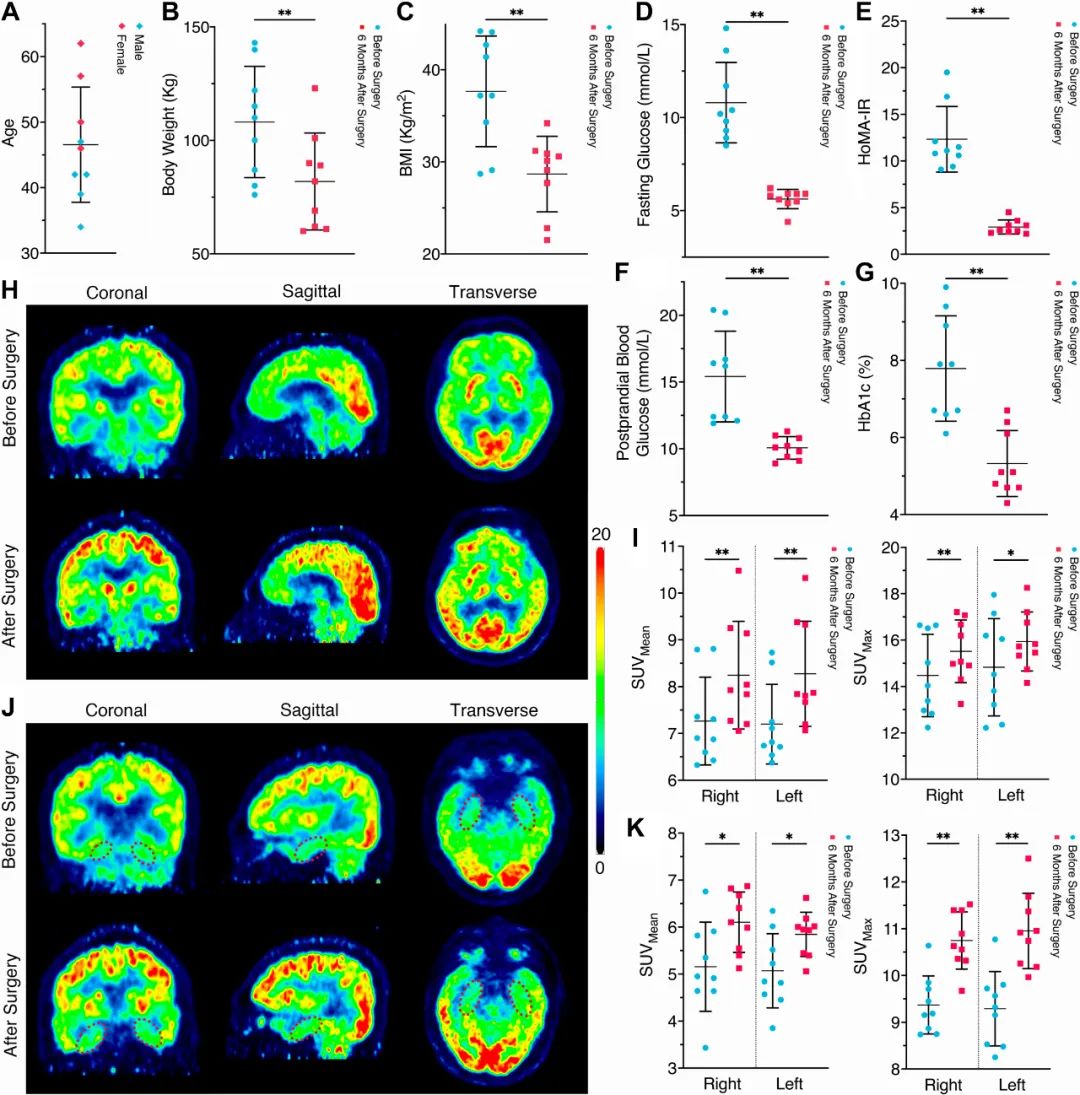 Patients’   sex, age, and comparisons on body weight, body mass index (BMI), fasting blood glucose (FBG), homeostasis model assessment of insulin resistance (HoMA-IR), postprandial blood glucose (PPBG), HbA1c, and brain glucose uptake before and 6 mo after Roux-en-Y gastric bypass (RYGB). A: sex (indicated with different colors) and age of the patients. B–G: comparisons on body weight, BMI, FBG, HoMA-IR, PPBG, and HbA1c. H–K: representative brain positron emission tomography (PET) images of the same patient and comparisons on the glucose uptake of the whole brain (basal ganglia section) and hippocampal regions (red circles) on each hemicerebrum before and 6 mo after the surgery. Standardized uptake values (SUVs) of each hemicerebrum were calculated on the transverse images at the basal ganglia section to assess the whole brain glucose uptake. For the glucose uptake of the hippocampal regions, SUVs were calculated by restricting to this area on the transverse images. Nonparametric paired t tests (Wilcoxon tests) were used, and data are expressed as means ± SD. *P < 0.05; **P < 0.01 (n = 9 for the patients included in this part).

To further elucidate the mechanism behind what we had seen on human subjects, an animal study was designed using the obese and diabetic model of Wistar rats (Fig. 2). Considering the possible mortality, two extra rats were prepared for supplement in each group and disposed exactly the same to meet the desired sample size. In all, among 72 operated rats in both DJB and Sham group, 6 rats died after DJB surgery, 4 in the Sham group died of hyperglycemia, and 7 died during or after the LV cannulation (data not shown). Groups with insufficient samples were supplemented whereas the redundant rats were excluded to equalize the size of each group (n = 4).

Compared with the Sham group, a nearly parallel evolution with significant differences at two time points were observed on body weight (postoperative week 2 and 4) and food intake (postoperative week 1 and 2) in the DJB group, respectively (Fig. 3, A and B). Meanwhile, DJB surgery exerted a salutary effect on FBG, AUCOGTT, and AUCITT, which were all dramatically declined compared with the Sham group (Fig. 3, C–E). Consistently, DJB rats showed decreased serum HbA1c levels but opposite in serum and CSF insulin concentration compared with the Sham group (Fig. 3, F–H), indicating a restored islet and β-cell function. These results suggested that DJB improves glucose homeostasis both peripherally and centrally and thereby remits T2DM in these obese and diabetic rats. 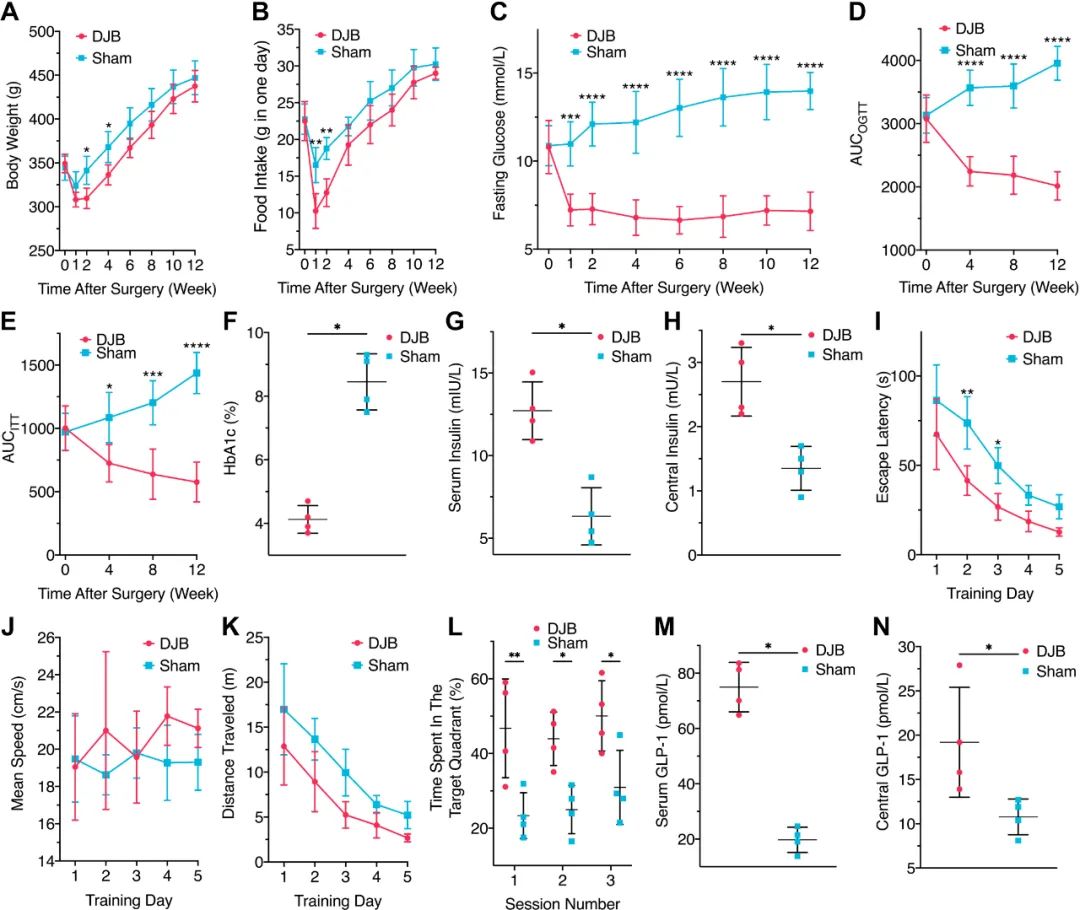 The improvement of glycemic status in rats replicated what we had noticed on patients. As an improved cerebral metabolic status is deemed to favor a better brain function, we decided to first study the alterations in cognitive function. In the MWM test, significant differences in escape latency on training day 2 and 3 between DJB and the Sham groups were noted (Fig. 3I). The results of mean speed and distance traveled, however, indicated that there was no significant difference in the locomotor activity among two groups (Fig. 3, J and K), yet the gap between the time the rats of two groups spent in the target quadrant demonstrated that the DJB group had a better memory, in other words, brain function compared with the Sham group (Fig. 3L). Next, we found that the level of GLP-1, whether peripheral or central, was in line with the alteration in cognitive function (Fig. 3, M and N). 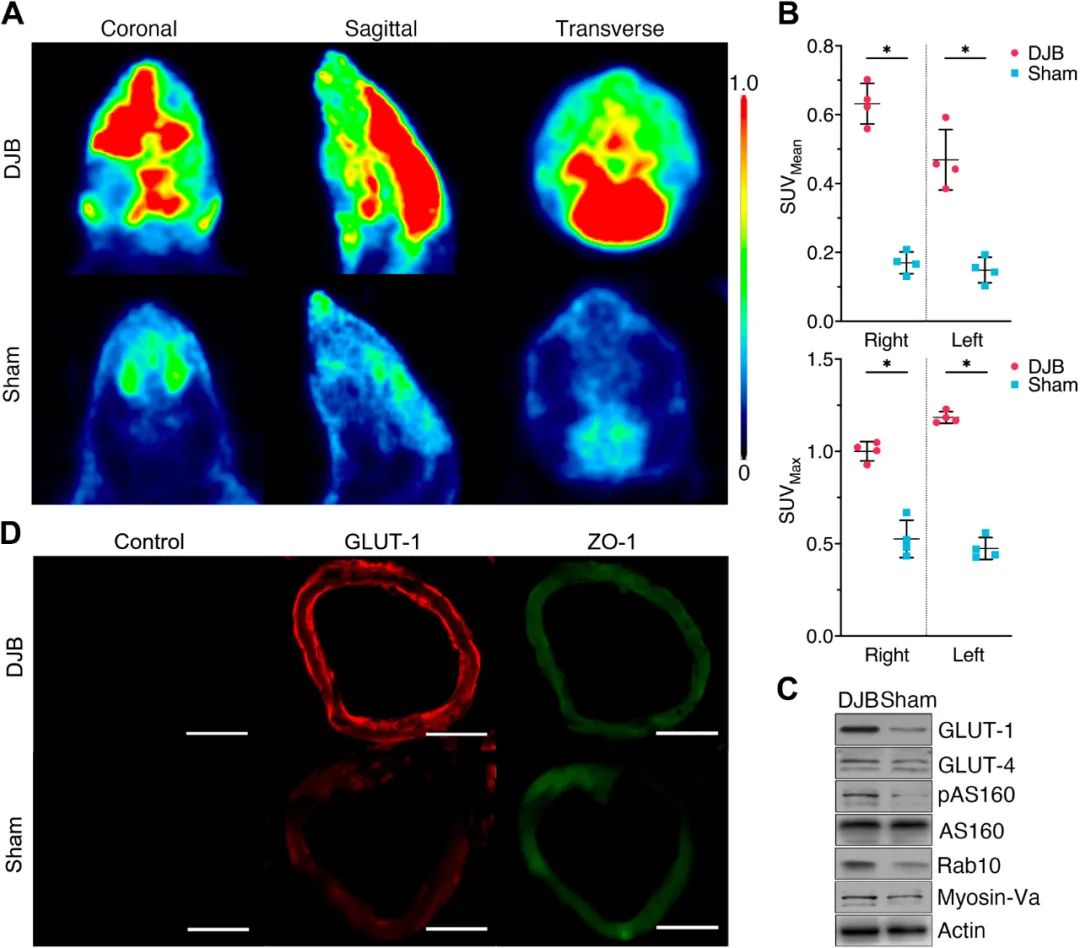 The   effect of duodenum-jejunum bypass (DJB) on brain glucose uptake and glucose transport. A and B: representative rat brain positron emission tomography (PET) images and comparisons on the glucose uptake of the whole brain on each hemicerebrum between the DJB and Sham group. Standardized uptake values (SUVs) of each hemicerebrum were calculated on the transverse images. C: immunoblotting of glucose uptake-related proteins. D: immunofluorescent images of glucose transporter-1 (GLUT-1) on blood-brain barrier (BBB) of the DJB and Sham group (bars = 5 μm). Nonparametric unpaired t tests (Mann–Whitney tests) were used and data are expressed as means ± SD. *P < 0.05 (n = 4 for animals in each group). AS160, Akt substrate of 160 kDa.

Except for the general role of RYGB in weight loss and T2DM remission, an enhanced brain metabolism was noticed in our patients after surgery, where an elevated glucose uptake of both the whole brain and the hippocampal regions were confirmed. The effectiveness of bariatric surgery in reversing the elevation of insulin-stimulated brain glucose uptake that is related to endogenous glucose production was reported (37). The high level of glucose in the brain, as we mentioned, is harmful because the brain, like the other organs, suffers from glucotoxicity, which makes the improved brain glucose uptake maintaining a normal glucose level after bariatric surgery more delectable. In another study, RYGB was shown to restore the increased brain glucose uptake and improve the executive function of the brain in obese but patients with nondiabetes (38), this conflicting observation was probably caused by the discrepancies in the medical background of the study population and the methodology in brain glucose uptake evaluation, since all of our patients were diabetic and the SUVs were calculated using a different technique at the basal ganglia sections and hippocampal regions, respectively. However, an enhanced brain energy expenditure in accordance with the whole body after bariatric surgery, which we believe, can undoubtedly ensure a better cognitive function and prevent neurodeterioration. Unfortunately, compared with the countless results related to the remarkable changes of peripheral metabolism after bariatric surgery, literature focusing on its influence on the brain is still scarce. It is worthy to note that, as an insulin- and glucose-sensitive organ as well as the initiator of the humoral regulation per se, the brain plays a critical role in the progression of T2DM by affecting insulin signaling and glucose uptake (39), which in turn, is undoubtedly indispensable in the radical alterations following bariatric procedures. Far beyond improving cognitive function (19), the antidepressive and antianxious role of bariatric surgery has also been spotted (40). Predictably, more and more beneficial effects of bariatric surgery will be discovered in the future ongoing studies centered on this field.